The choice you make of how to watch TV in your home will affect whether you need a dish or an aerial.

Satellite television is provided via a dish, which receives signals that are then sent directly to either your television set or set-top box.

Freeview and terrestrial channels on the other hand depend on an aerial transmission and would require an aerial to be fitted to allow your home to receive television programmes. 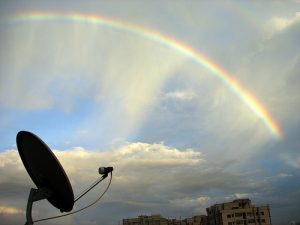 The only time you may find that you want to install a ‘satellite aerial’ is if you want to enjoy the freedom to choose from more than one service, which many people do.

Satellite television services such as Sky and FreeSat rely on satellite signals that can be sent to dishes, which would be what most people would mean by ‘satellite aerial’, although it is not a technical term in itself.

However, if the satellite signal was to fail for whatever reason you would not be able to watch terrestrial television without a TV aerial.

While a Sky TV package includes access to terrestrial channels such as BBC1 and ITV these can only be accessed if the dish and Sky box are working correctly.

With a high standard of service to be expected from Sky this is not usually a problem and it is to access even greater choice that people do sometimes wish use a terrestrial service as well as a satellite dish.

Do you need satellite and aerial connections?

In this scenario if you had a TV aerial as well as a satellite dish you could easily switch to watching terrestrial television.

While the need to watch or record three channels at the same time may seem like an embarrassment of riches in television terms, there are occasions when enough quality TV is packed into a schedule to last weeks. Think about Christmas clashes and sports highlights – and the family battles that can ensue!

While installing a satellite service or choosing an aerial-based service will meet the needs of most homes, many people prefer to have the choice.

We have had a working relationship with Aerial Services for the past decade. In that time we have found no finer aerial company for customer service, value for money and quality of installation. Aerial Services have serviced, maintained and installed television and Sky equipment to the majority of our property portfolio. This is as a result of the trust we have in Aerial Services to react to our needs and also to provide us with guidance and accurate … END_OF_DOCUMENT_TOKEN_TO_BE_REPLACED