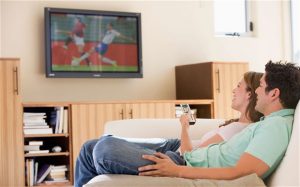 There are few things more frustrating than sitting down to watch the TV show or football match you’ve been looking forward to all day than to be met by a frozen screen.

With the television set being a big part of family life, there are few people who haven’t experienced a loss of sound, fuzzy pictures, an over-powering buzzing sound and a frozen screen.

But what do you do when pushing the scart cable back in and switching the TV off and on again doesn’t fix it?

Well if the match has kicked off now is the time to panic as there is a very strong chance that there is something wrong with the aerial that only professional help will be able to remedy.

Has your aerial moved out of place?

Due to being erected on the sides and roofs of houses, aerials are at the mercy of the elements – as well as being prone to standard wear and tear.

As such when the picture starts to deteriorate it could be any number of issues with the aerial.

Freeview aerials, Sky and Freesat dishes could all be affected by becoming dislodged or moved out of place, affecting the signal that is received.

A call to Aerial Services will have a problem such as this fixed in no time.

A poor picture could also indicate deeper problems with your home entertainment set up though, not least damaged cabling or sockets, which could have become water damaged or just have deteriorated over time. These will obviously need replacing as soon as possible to put you back in the picture.

Think outside the box

When having problems with the picture onscreen don’t make the mistake of instantly deciding it is an issue with the television – that could prove to be a very costly mistake indeed.

Aerial Services will be able to promptly identity – and resolve – any problems that are related to your aerial, putting you back in the picture in no time.

If you think you aerial may be affecting the quality of your television picture contact Aerial Services.

We have had a working relationship with Aerial Services for the past decade. In that time we have found no finer aerial company for customer service, value for money and quality of installation. Aerial Services have serviced, maintained and installed television and Sky equipment to the majority of our property portfolio. This is as a result of the trust we have in Aerial Services to react to our needs and also to provide us with guidance and accurate … END_OF_DOCUMENT_TOKEN_TO_BE_REPLACED